Home
Other
The Future of Robots for Business

“They’re taking our jobs!” a picketer shouts as he waves a sign painted with a big red “NO” symbol and the profile of robo-assistant. People clog the streets of the capital. Angry workers displaced by the robot revolution.

It’s a future Isaac Asimov predicted. In his fiction, robots worked alongside humans to accomplish dangerous tasks better. They could calculate at superhuman speeds and had overtaken much of the lower job market.

While we’re not there yet, robots are slowly crawling into our lives. They help us keep our floors cleaned and shined. They help us build cars and help us secure our buildings.

Today we’re going to talk about what robots are doing today and what they’ll be doing in the future.

What Exactly Is a Robot?

Bots, robots, androids, droids, etc. You’ve probably heard all these terms and seen very different things applied to each. All of them seem to be robots of some sort, but are they?

The term robot has changed over the years. Back in the 30s, vending machines were considered robots. And in a sense, they were. They replaced the need for a human to sell you candy or coffee or sandwiches.

Today, we just consider them appliances because is your dishwasher a robot? (Hint: some might actually be robots.)

So what the heck is a robot anyways? The funny thing about robots is it depends on what you consider a robot to be. A little post-modern, huh?

Are remote controlled machines robots? They might use robotics, but most in the robotics world would not consider them robots. Why? Because they’re not autonomous.

Robots complete complex tasks. This is why your dishwasher isn’t exactly a robot, but your Roomba is. Your Roomba is a robot not because it vacuums your floor, but because it intelligently navigates your floor to vacuum it. It seems like tomato tomahto, but it’s just a more concise definition of robotics.

If your dishwasher took individual dishes, washed them and dried them and put them away with a robotic arm and then cleaned up after itself, it would be a robot. Those are complicated tasks for a machine.

So, a working definition of a robot: an autonomous machine that completes complex tasks in the physical world.

Why are robots improving? Mobile technology.

If Steve Jobs hadn’t unveiled the iPhone back in 2007, robots would not be improving today. Why is this? Because sensors.

Sensors are necessary for robots to navigate our world. Without them they’d be blind. But up until recently, complex IR sensors were huge and housed in large amounts of plastic. They also needed a ton of power. Essentially, they were so expensive only major industries and government/military contractors could afford them.

The demand for mobile tech dropped the price. It also miniaturized that tech.

What kinds of sensors does a robot need? Accelerometers to sense movement and maintain balance, infrared sensors to sense the world and the things in it, cameras to do the same, laser sensors to measure distance. All of these things were prohibitively expensive until recently.

Add on top of this the invention of wifi and internet connectivity and you’ve got the ability to make machines fully autonomous.

The concept of open source became popular with the advent of things like Firefox and OpenOffice. A company would put their software out there and allow anyone to augment it and improve upon it.

This concept bled into robots in 2009. How? Through a standard operating system.

If you’ve ever studied operating systems, you’d know they were complicated. What you see on your computer screen is just scratching the surface.

Building your own operating system is a time-consuming pain. If each company had to build their own OS for their own robots it would gobble up resources. But if there is a readily available OS for all robotics, this frees up smaller companies to innovate and focus on the robots and their functionality.

How much do you think parts manufacturing cost back when the movie Short Circuit came out in the 80s? Whatever it was it costs much much less now. Why? 3D printers.

You can take a design that was once impossible to manufacture and create a prototype of it in a few hours. For robots to fit into the spaces they need to, they need mind-bending designs. The ubiquity of 3D printing in our world allows for maximum creativity and efficiency of design.

In the rest of this article, we’re going to focus on how robots and their innovative design are already helping the business industry thrive.

The Robots Changing Our World

Johnny 5, T-1000, Robbie, all the robots from popular culture haven’t always been on our side. But today, the robots we know are our pals.

They vacuum our floors, they drive our cars, they keep us safe. But what are they doing for the business world?

Here are a few game-changing robots that will be augmenting your work environment soon (if they aren’t already).

These robots learn by watching humans. They’re the monkey-see-monkey-do robots. They’re super easy to reprogram to do different tasks.

You see these robots in the automotive and electronics industries. And they’re powerful and safe at the same time. Why? Because, unlike their heavy 20th-century counterparts which operated in cages, they can tell when they’re nearing a human being. They can sense when they’re going to collide with something they aren’t supposed to

Robotic surgery is a thing. Scary…or maybe not. Can robots get drunk? Can they get addicted? Can they get fatigued? Nope on all fronts.

You want a surgeon with a steady hand. If they snip the wrong thing, you could die. Robots can be more precise. Why not make them do the surgery while the man with the brain oversees?

Similarly, robots could intelligently assist surgeons by handing them tools and readying tools before they need them. They could intelligently offer light where light is needed and do simple tasks like sewing up surgery sites or monitoring heart rate or EKG. 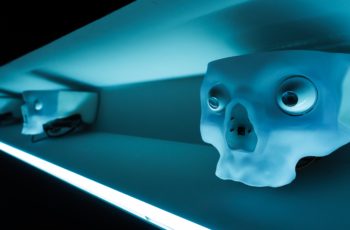 “In a properly automated and educated world, then, machines may …