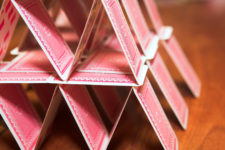 Why would we possibly want to emulate him or anyone associated with him?

Yet, even for all his faults, this contemporary Richard III entreats our souls and makes us root for him and his family.

If you’re in the world of sales, you understand what it takes to get ahead of the competition. Like Frank Underwood, you also understand that it sometimes takes a little more than just “a gentle touch.”

Today we’re going to delve into one of the most popular shows on the Internet. So, don’t stop reading now. You’ll miss out on all the fun.

1. “If You Don’t Like How the Table is Set, Turn Over the Table”

Rules are a good thing. They help us play nice. When driving down the road, if we play by the rules, we’re less likely to get into an accident.

But there are times when the rules just get in the way. Frank Underwood would most certainly agree.

Sometimes he would just “find a way around” them. Like he did when, in Season 2, he forced a quorum by kidnapping senators and placing them in the senate chamber.

You see, when the rules didn’t go his way, he forced them to bend to his will. When the abstaining Senators refused fill the quorum, they didn’t expect physical action.

20% of sales force tends to garner about 80% of business. You’ve probably heard it before.

This rule seems to be a self-fulfillingÂ prophecy at times. We avoid pain, and procrastination comes from it. A lot of times, we only put in about 20% of the effort — because to put in 100% would just mean more work.

The way to get around the 80/20 rule is to stop wasting time on unproductive activities.

Think of the stuff you’re avoiding. Would it help you drive sales?

Yes. So do it. Grow up. That’s 20% of your day you could be using to your advantage.

The difference between someone who actually drives sales and someone who wants to drive sales is that 20%. The best salespeople identify the 20% that will drive 80%. And they work that 20% to death.

It took Frank Underwood only two Senators to swing the vote. And he got around the quorum rule another way. Essentially, Underwood used the 80/20 rule himself. Take note.

2. â€œThereâ€™s No BetterÂ Way to Overpower a Trickle of Doubt Than With a Flood of Naked Truthâ€

Frank Underwood is a liar. There is no doubt about that.

But Frank Underwood is also honest…at times…when it serves his best interest.

Do sales people lie? You want to spin your product as the best in the world, right?

But what happens when a business is caught lying through their teeth? The public strips them down to size. A lot of people think sales is a liar’sÂ game. And it’s true — there are some sleazy salesmen out there.

But the top 10% of salesmen don’t lie. They know how to use the truth to their advantage.

Your product isn’t going to be for every person on the planet (unless you’re Mark Zuckerberg). So, why pretend it is?

Instead, find the real things about it that will appeal to your customers. Showcase those things. Tell the truth effectively.

3. “I Love That Woman. I LoveÂ Her More Than Sharks Love Blood.”

Frank and Claire are basically one person, right? They’re the dynamic duo that swept the Senate, the White House, and even the nation off their feet.

Frank Underwood would be nobody without Claire. She is his shining star. His balancing act.

The point is, you could learn from this relationship. Maybe not for your own personal relationships, but definitely when it comes to your business partnerships. Sales are best done with a partner. Whether that’s two sales people going in together or two teams joining up.

If you work with someone rather than against them, you achieve more. You sell more.

One of your greatest assets will be marketing.

You’ll close more leads if you work with marketing rather than against them. Marketers can give you insight into what information the buyer needs at every stage of the sales journey.

Market research will give you an edge on the competition who refuses to work with a marketing team. So, it’s time to make up with the marketing team and getÂ a proposal together.

You’ll quickly learn to love them like you love your own flesh and blood. You’ll also close more leads and drive more sales.

4.Â â€œThere Are Two Types of Vice Presidents: Doormats and Matadors. Which Do You Think I Intend to Be?â€

Frank Underwood played the long game. He went from being a Southern Democratic Senator to being President of the United States.

He didn’t do it byÂ being satisfied with Senator or Majority Whip or Vice President. He planned from the beginning to win the nation.

He laid out every step and destroyed every obstacle. And he succeeded…for now.

Which kind of salesperson is a top-of-the nation salesperson? Someone who knows their end goal, or someone who only focuses on the short-term?

I can tell you that the Frank Underwood approach (without the backstabbing and the murdering) is the better approach. There are two things to be learned here: never be satisfied and know the long-term goal.

If you expect quick results, you should go flip burgers at Burger King.

But if you’re in it for the big payoff down the line, you should have a plan and stick to it. A bidrik business plan template is my favorite way to keep track of my long-term goals.

Instant gratification is nice, but a big payoff is better.

Conclusion: Don’t Be Frank Underwood, Learn From Him

Underwood is petulant and violent as well as smart. I would never advocate you actually act like the man.

But some of his tactics can and should be applied to sales. If you heed this advice, you will go far.

If you enjoyed my analysis of House of Cards, check out the rest of our “What You Can Learn From TV Shows” series.