The Iconic Google AdSense Check and My 10 Year Journey After

This is the backstory to one of the most epic and iconic pictures in internet marketing. A When I cashed this check it was accompanied by a $350 unemployment check. A My story isn’t rags to riches but I was 50k in credit card debt, 420 lbs, smoked 2 packs of cigarettes a day and was on unemployment. A Then over night started cranking in money with Google Adsense. A This was the start of my journey making money online.

First let me start with just that and then I will go on about what I learned and from there talk about all I learned from that site and applied it to where I am today.

Giving credit where credit is do – throughout this post I refer to everything as I. A Obviously everything wasn’t all done by me. A I coded out the first couple years of NextPimp myself but when it became huge I brought in David Dellanave who was a huge part of it’s and future company successes.

But lets start with what started it all.

Over the years people have tried to use it for acting like its them and they are going to show you the secrets on how to make money. A Or say that I used their system and produced this. A Yes I go after them and I don’t mess around.

Feel free to use it for non commercial purposes (blog posts, etc). A Just I ask you link back to this post (follow or no follow link whichever).

If you would like to use it for commercial user, I.E, a your product – Please contact me and we can figure something out. 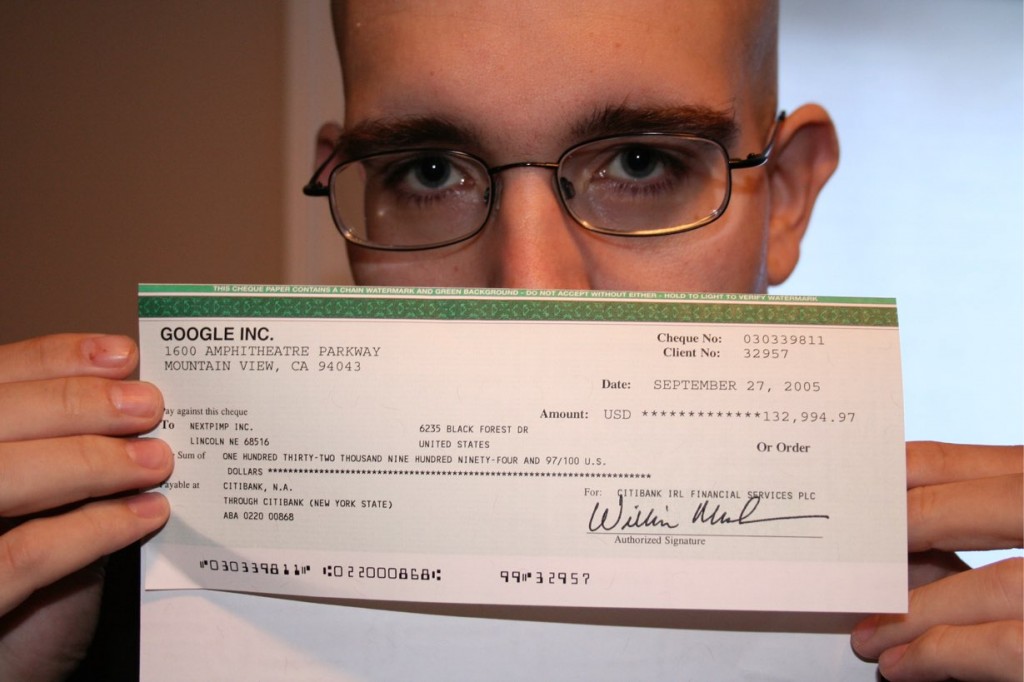 About once every other day I get a question about the AdSense from 10 years ago. Â I originally posted the check in this thread. Its most visited page on shoemoney.com (behind the main page course) with 1-2k unique visits per day.

and here is the full month report: (I have permission from Google to display this in my blog and in my presentations. Please check with Google before you disclose any of your reporting) 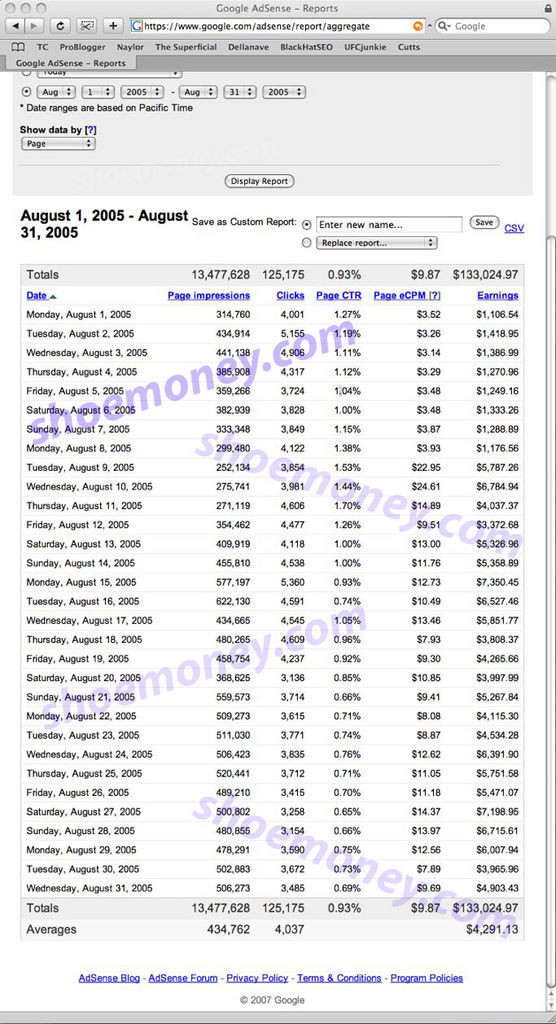 About 3 months, Â and discovering this wasn’t just a fluke, I decided to chase the money a bit. Â If people could afford to pay me that much per click + Googles 25% or whatever it is advertising fee then what if I promoted directly to the advertiser who was advertising through Adsense.

So this began my journey with Affiliate revenue. Â Even though I went on a world wind tour speaking about my story and how Google Adsense changed my life I was no longer using it. Â I was now going direct to the advertiser either charging them to advertise or using their affiliate program.

Some big brands advertised (Sprint, Nextel), but I made more revenue with Affiliate Marketing.

With affiliate marketing I promoted directly what people were advertising through Google AdSense. Â Since the affiliate network is no existing (Azoogle) I only had this screen shot from my archives for 1 month of affiliate revenue from NextPimp in 2006: 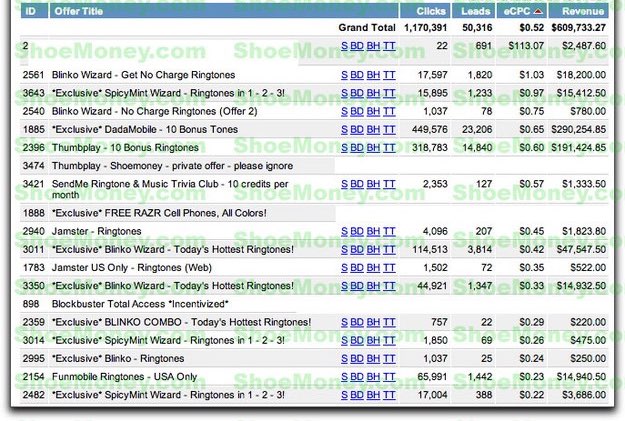 With NextPimp I also had “Premium Forums” which charged a monthly subscription. Â These forums would contain walk through guides and support from other users. Â  I compensated the users by letting them run their own AdSense code on the forums part of the site and balanced it between them (stole that idea from Shawn Hogan). Â They all made thousands a month Â ( $3000-$5000 per person). Â It was awesome though because I was 100% hands off.

However I kept the subscription revenue from users to access the forums. Â This was my introduction to subscription revenue. at first I charged a flat $20 per year via PayPal. Â But after reading some article about price points and psychology I gave options to users offering them different prices based on how they wanted to be billed.

Conversions to subscriptions tripped when I offered these options and 75% of the people took the monthly plan. Â  At first I thought a lot would just stick for 1 month but on average it was years. Â  If I told you the exact number per user that paid $5 per month you would not believe me on how much that worked out to.

Between us people keep paying the subscription through Paypal for years after the site wasn’t even available. Â  Unreal.

Now you have to keep in mind that when this site was at its peak it was at a time when you had to load these ringtones via a serial data cable. Â Most people had no idea where to buy these.

I hired a local kid to package and ship them for $8 per hour. Â Good margins on that.

Revenue from this was not huge compared to the others. Â The kid that shipped them only worked about an hour every 2 days so I would say maybe 10-15 per day so just for numbers sake on the low end about 100k extra in profit.

So, as illustrated above, Â I had made good money figuring out what people were advertising through Google AdSense via Adwords. Â So I started playing with that bidding on keywords driving them to the same affiliate programs that I was making money with.

At first I lost my ass. Â I remember losing 1k in my first 30 minutes. Â Oups I forgot to set a budget. Â I would go on to lose money for the first month or so as I tested the “suggested” keywords Adwords brought up.

I also bought keyword lists that had all the best keywords for the mobile vertical…. Â still losing my ass.

But then one day it hit me. Â WHAT AM I DOING.

Because I had a search button and was getting tens of thousands of searches a day I had my own keyword list on what people were searching for.

But I not only had a keyword list I had THE keyword list. Â I had realtime searches and typos of searches.

Now I was cooking with butter. Â Between the various search engines (Google Adwords, Microsoft Adcenter, Yahoo) I was tripling my money. Â With the Adwords API I could actually real-time bid on the searches going on. Â I also could pull keywords that were not working out dollar wise. Â It was awesome.

This post has mostly focused on my monetization experiences & education.

I learned so much more than what is mentioned in this post. Â optimization, conversion, general business stuff (The first year I made over a million dollars H&R Block did my taxes LOL).

In 2007 I got greedy and board with NextPimp. Â I was doing a lot more with pay per click and started my own advertising network called AuctionAds. Â NextPimp became whats called a “thin affiliate site”. Â  Over a long period of time the site lost its rankings with Google for some heavy keywords and I sold the site in 2010 after revenue had dropped significantly.

A small part of me regrets letting it die. Â But I was on to much bigger things.

The Rise of a Career

In order to make this less of a TL;DR than it already is, Â I took the skills NextPimp taught me and went on to do some cool stuff.

The ShoeMoney Brand & Blog – I started ShoeMoney.com in 2002 but nobody really read it until 2005 when I started about what I was learning in the world of making money on the internet. Â I never posted the AdSense check publicly until 2007 which of course made the blog explode. Â It was only in 2010 that I actually publicly revealed that it was Nextpimp.com that was giving me all this experience that I was sharing.

The AuctionAds Advertising Network – This started as a service called ShoeMoney Ads. Â Basically a network that allowed people to make AdSense like ads on their site but use their own links to Affiliate Programs. Â I never charged anyone to use it. Â Then we decided to build the network around eBay and collectively leverage a high affiliate payout and pass that on to publishers. Â I never took a cut from that. Â Paid out 100%. Â From that AuctionAds grew and when I say grew it went like a rocket. Â By the 2nd month we were doing over 2m in revenue. Â This was springboarded from the blog and other connections I had made. Â I sold the company 4 months after I started it. Â I can’t publicly disclose the exact price. Â There are rumors on the internet anywhere from 5 to 20 million. Â But again I can’t confirm or deny those. Â I will say that when the sale happen every employee that worked for me I gave a million dollars to or more depending on their contribution. Â Some got significantly more.

I feel like this would be a never ending huge list. Â I have had over 14 registered corporations in the last decade each with its own thing and some of them with many things.

I have sold internet marketing tools, products about how to make money online, a mixed martial arts site, and about 20 other things.

Most recently I sold my email marketing company for 12 million.