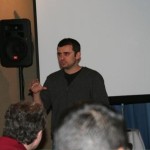 Brent and I have known each other for 7 years as he started off as a student of mine and since then he has been to Omaha to visit and hangout and I have learned a lot from him.

Brent Pourciau tore his rotator cuff at 18 years old in his first college appearance as a baseball pitcher. Doctors told him he would never play again. Through an insane work ethic and his desire to play the game he loved again he developed a pitching velocity program that developed his 94mph fastball and took him to professional baseball at 26 years old. Brent retired as a player at 30 years old to coach the game using his revolutionary pitching velocity program. Today his program has sold more than 20,000 copies to baseball pitchers all over the world from little league to Major League Baseball. His is currently an advisor to some top level D1 Universities along with all levels of college and high school baseball. He is also a biomechanics consultant for the Tampa, Rays and has worked on the MLB draft and some big name trades in Major League Baseball.

I am so happy to have Brent on my show tomorrow!

So, go here now and register! Even if you cannot make it liveÂ still register so you can get sent the replay!

Tomorrow’s show is brought to you byÂ the biggest and fastest growing health and fitness affiliate programÂ Onnit!Â Go here to get the ShoeMoney exclusive special for podcast listeners!