For some kids, it’s soccer.

For some kids, it’s playing the piano.

For me, it was the abacus.

If you don’t know what that is, it’s bunch of beads you move around to signify digits. Believe it or not, you can do addition, multiplication, subtraction, and division.

Of course, I was a 7 year old kid and I wanted to go outside and play, not play with beads all day.

I hated it at first… when I first saw them, i thought maybe these kids had their brains eaten by zombies… staring down at them beads and moving them around endlessly.

But apparently, it was my mom who had her brains eaten because she actually took me to a private abacus school where apparently the Korean champions of abacus were born.

No, she wanted me to a math nerd moving beads around.

Of course, I was 7 and my mom wasn’t about to let me practice democracy. So I did what she asked.

As much as I hated every moment of it, I was good at it.

I was the bead master… I remember the owner of that school would “use” me to get prospective parents who were interested in enrolling their kids to the school.

He would have this list of 20-30, 7 digit numbers that he’d have me add up. He would have his secretary use a digital calculator and have her “race” me while I calculate in my head. Of course, I would be done in a few seconds and spit out a number. We’d wait and see that my number matches the printout on the calculator.

The parents would be so fascinated that they would immediately sign up their kid, with the “promise” that their kid too would be a wiz once they learn this. (Now that I realize, I should’ve gotten a cut for doing this.)

So much so that the owner of the school thought I should enter the national competition. He would “train” me & let me practice without charging tuition to my parents. (Heck, we’d be giving the school free PR if we won.)

That summer was intense. Here’s what the schedule looked like (for 6 & 8 year olds)

Now, I did this EVERYDAY during every break from school.

Did i get good?

My sister and I came in 1st and 2nd in a national compeition, and were eventually picked as candidates to compete in Japan (but my parents turned them down because they thought it was “too much”).

If you really thinkg about it, this is no different than anything in business.

1) Talent you’re born with. Skill is something you develop by hours and hours of beating on your craft.

Was I a talented math kid?

Believe it or not, not all Asian kids are good at match… let alone love it. I liked Gundam and Mazinger Z. I wanted to be the guy controlling 30 story tall robots, not crunch numbers.

I hate writing, but now it comes natural to me because I’ve blog about marketing & growth hacking.

I blog regularly now I don’t really “think”. I just do.

2) Get a good mentor

If you read any story where a hero goes on a journey to save the girl, save a village, win some big prize, or a cause bigger than himself, you notice how there’s always some wise man who helps him along the journey

When I did abacus, I had this crazy dude who would scream & rant about how I got some calculation wrong.  I was 6-7 years old for god’s sake, but this dude made me better by making me challenge myself, and tell me to keep trying when I felt hopeless.

When you’re on the path of entrepreneurship, it is TOUGH. Ups and downs, successes and failures… i don’t care what anyone says it’s tough as shit and things don’t necessarily get easier, the way you react to them just gets better. (It should, anyway).

How much easier would it be if you had someone who can shed some light and some wisdom during the hard times?

Not gonna lie, I personally struggle with this too because I noticed the ones that want to “help” have some ulterior motive when things are good, and vanish when you’re struggling.

If you don’t have a mentor, it’s ok. There’s the web – you can read about other people’s nuggets of wisdom, their trial & errors, their stories, and of course, their advices on their blogs, books, podcasts, etc. If they don’t mentor you personally, at least you get to see what’s going on in their minds.

(Take a look at Mr. T’s story… a TRUE story of rags to riches story.)

This is so much easier said than done.

There are two kinds of pains in this world: the pain of discipline vs. pain of regret.

They both have pains… except one comes first but things get easier, whereas the other one it’s easier now but the eventual pain that you experience is much bigger and much longer lasting.

You have a choice.

Quit now and do easy stuff. Go eat cheeseburger, drink beer, and do whatever everyone else is doing.

Or, do what you know is right.. today.

Remember, you can always quit.

So why not quit tomorrow?

Do you have 2 arms and 2 legs? Then you have a reason to keep going.

Remember, it’s only a failure if you give up. 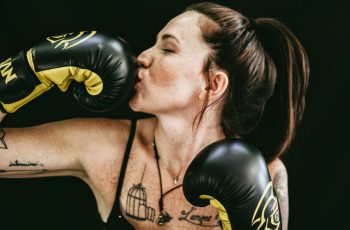 TaeWoo is an accomplished online marketer with 10+ years of experience in affiliate marketing, lead generation, SEM, PPC, and media buying. You can follow him on his blog at FreshSuperCool.com or on Twitter @TaeWooKim.