When will Rand from @Moz learn his lesson to not piss of Matt Cutts with false SEO claims?

Ah, Rand.Â  I started off a blog post like this over a year ago, and the same phrase fits with the latest Moz scandal that hit last week, one that brought Matt Cutts out of the woodwork to publicly debunk it on Hacker News.Â  So I guess it shows that Rand and his newly renamed Moz company is popular enough to warrant Matt specifically calling out the Moz theory â€“ well, not that theyâ€™re calling it a “theory”, they are calling it a correlation – that Google +1s are not only a strong ranking factor in the Google algorithm, it is also the number one factor in ranking.

Now, incase you were on holidays last week, first, the article with the simply amazingly egotistical title: Amazing Correlation Between Google +1s and Higher Search RankingsÂ  Then the Matt Cutts’ debunking on Hacker News.

Now, even without Matt’s public comments calling out the Moz +1 â€œtheoryâ€, a lot of us were calling bullshit.

Sure, SEOs arenâ€™t discounting the fact that +1s are something to take the consideration and something that, yes, should be sought. But we all think it is pretty freaking ridiculous that it is the number one ranking factor. If that was true, I could go out there and create a bunch of fake Google+ accounts to +1 up all kinds of spam sites, if anything would rank number one if I threw enough +1s at it.Â  And the thing is, there are SEOs testing this. Â And donâ€™t you think of it actually was working, and was the number one factor that the search would be littered with payday loans and mesothelioma?

Not only is Matt debunking the Google+ thing, he also brings up that Rand did the exact same thing two years ago when he said that there was a high correlation between Facebook shares and Google US search position. But apparently being called out by Matt once for nearly the identical thing wasnâ€™t good enough for Moz, they had to go and try it again to see if they could get away with saying it, without raising the ire of Matt (mission: unsuccessful).

And I suspect it won’t be another two years before Matt has to go and publicly debunk something the Moz machine is churning out.Â  After all, they love the attention, and it Rand has always seemed to subscribe to the theory that all publicity is good publicity, even when we’re calling him out for shit.Â  And Moz has always been about being attention whores, back when Rand was the King of Link Bait, which was the only reason he had successful clients back then, he was fairly decent at link baiting for clients before everyone started to do it.

But if you notice in the addition to the end of the blog post, he makes reference to the posts that Matt has made on Hacker News but then he is still trying to argue that heâ€™s right by trying to say that +1 still are the way to rank, but he argues that â€œthe evidence seems to suggest Google+ posts do pass other SEO benefits not found easily in other social platformsâ€.Â  But I guess Moz is going to do whatever they have to do try to save face for when they have the web spam guru at Google calling them out for being wrong.

It reminds me of the case of the bird eating the frog while the frog has its hand wrapped around the birdâ€™s neck. Sure doesnâ€™t do much for business when you have Matt Cutts publicly saying youâ€™re wrong, but then Moz does have more than it’s fare share of fan boys and fan girls.

It also doesn’t help the situation when you have the Moz’ “Director of Community” making comments like this, while not even giving the time of day to legitimateÂ  concerns people had about what this blog post was saying, until she’d been tweeted out many times.

Sometimes Moz needs to learn they aren’t God’s gift to SEO, and it wouldÂ  have gone a long way if she is simply tweeted something along the lines of ” had a great commentsÂ  on our newest blog post, lots of different opinions and we’re reading them all and the author is addressing them as we speak.”Â  It would have gotten a little bit more publicity, probably a bunch of retweets from peopleÂ  who were following the breaking scandal, and it would’ve shown that even if they didn’t agree with what Matt Cutts said in the end, they were listening at least.Â  But no, she goes and makes fun of their potential clients who are gravely concerned about this claim they are making, by accusing them of all having their panties in the pitch.Â  Nice one Moz.

It is also worth noting that Matt Cutts debunked it on hacker news, not on Moz.com, nor did he give a statement or anything to Search Engine Land, which could show that Danny and Matt are still on the outs from his whole anti-Google bend he has been on.

However, a day later Moz was still reminding us all about how awesome they supposedly are, by showing how well their post was, ironically, doing on Google+.

I do wonder how much longerÂ  it will be before the masses completely discredit Moz blog posts as beingÂ  fiction or an SEO’s wet dream.Â Â  None of the top SEOs give the vast majority of anything posted on Moz the time of day because it’s fluff it best or completely wrong at worst.

But with that, I will leave you with an amusing image posted on Twitter during the latest Moz scandal. 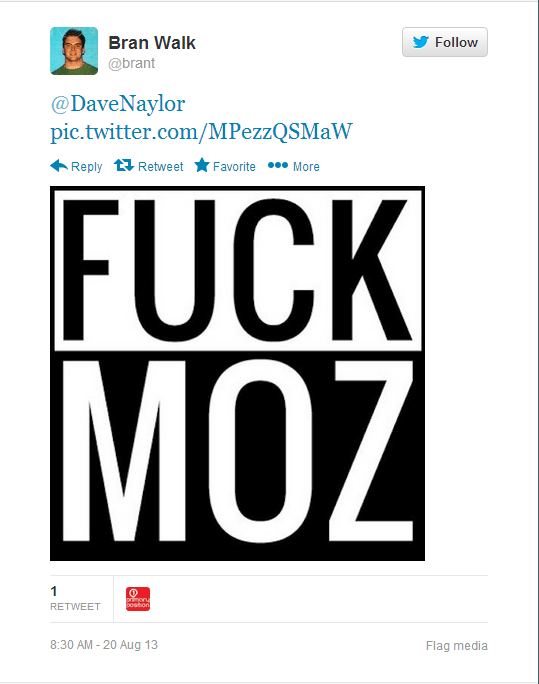 26 thoughts on “When will Rand from @Moz learn his lesson to not piss of Matt Cutts with false SEO claims?”