Home
Other
shoemoney
The Mob Mentality of SEOs

Never underestimate the power of a group of pissed off SEOs protecting one of their own.  Or at least that is what the whole Iacquire drama over the past week has shown us.  If you happen to indirectly attack someone who is buddy buddy with some other well known SEOs, well, the fireworks will commence.

In one corner, we have Michael King (@ipullrank), Director of Inbound Marketing for Iacquire.  In the other corner, we have Josh Davis (@JoshD), writer and publisher of LLsocial.com, who did all the research and original post about Iacquire’s link tactics.

It all started with @JoshD writing about some suspicious link requests he received which led to the downfall of the SEO agency Iacquire.  But because @ipullrank happened to work for Iacquire, Josh has been vilified in the industry by those who back Michael, despite the fact that Josh did an amazing piece of investigative work, including screenshots, responses and connecting the dots between the various companies iacquire was hiding behind.

And let’s be fair, I am sure that Josh didn’t set out with the plan of getting Iacquire banned from Google, because that was unprecedented for Google to ban an agency who was doing the link buying rather than the site that was benefitting from those link buys.  He was rather highlighting a case where he was repeatedly contacted by someone wanting to buy links, and it annoyed him enough to look into who it was.  As I am sure many SEOs would have done the same if they were being harassed by a company over paid links.

Whether you support outing or not (I am personally not a fan and wouldn’t do it myself, but it is what it is), as far as outtings go, this was the most researched one I think the industry has ever seen.  He could have simply posted some screenshot emails, called out Iacquire for buying links, and not bothered to do fact checking or tried to get responses from both sides.  He made it interesting, he had all the facts.  Yes, it resulted in Google banning the site, but I could not see Google doing something so brazen unless they had absolute proof Iacquire was behind it all.

But talk about circling the wagons.  Michael King is still really a “new kid on the block” who rose to stardom pretty quickly due to his connections with SEOMoz and SMX, but has quickly garnered a very loyal following, judging from the tweets attacking Josh.  Here is a sample (click on each image to go to the Twitter link for each tweet).

Then of course, those supporting Michael under the “he can do no wrong” mentality.

One, I am pretty sure he wasn’t framed, he just had the misfortune of working for the company who got busted for link buying.  And two, what Google did is to show Iacquire and Michael that yes, the rules do apply to them too.

In defense of Josh and his outting, there really wasn’t that many,  although many were tweeting his article without adding personal negative feelings about him doing the outting.

Then there was this exchange, where Yoast stood up for Josh, but I think Alan Bleiweiss (@AlanBleiweiss) sums it up best with “Ben, it’s called human professional respect and courtesy.  Seriously.”  And that pretty much says what most people on Team Michael weren’t doing. 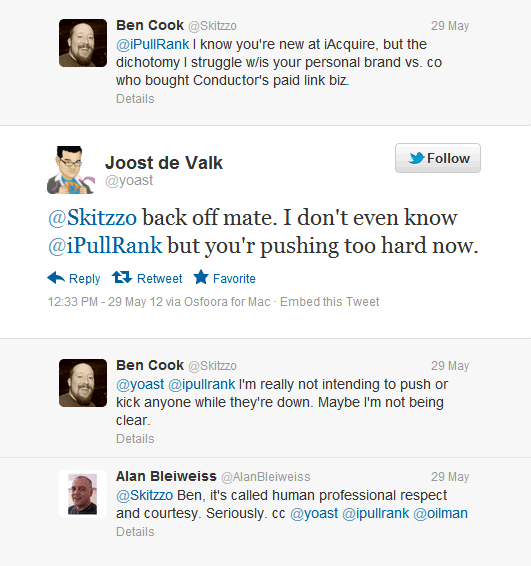 And lastly, something that really truly shows what SEOs shouldn’t be about – trying to out someone simply because you don’t agree with their opinion, which seemed to be in response to a comment made on the original Search Engine Land thread about Iacquire.

Would this mob mentality have happened if Michael King wasn’t a Director at Iacquire?  I highly doubt it.  There have been other SEO companies (SEO Inc comes to mind) that had been banned years ago in Google, and SEOs celebrated that fact when it happened.  The same thing happened when a nameless SEO was arrested and charged (I am not naming names because he has paid his dues to society, as far as I am aware) and industry people all circled the wagons to email his local newspaper and the judge that the charges couldn’t possibly be correct, and they had the wrong guy, it must be someone else with the same name.

It’s definitely not dying out yet (as you can tell from the dates on some of the screen shots) and I am sure the name calling and bashing will continue until Iacquire returns to the Google index – if it ever does.  Should Josh have written what he did? I think so simply because he had the facts to back it up, and it was so much more worthy than the usual “OMG ___ has this spammy backlink they must be spamming!” that we often see. Plus if Iacquire had taken a lesson on how not to piss off people with repeated paid link requests, we wouldn’t even be having this discussion – they are the real people to blame because if it wasn’t Josh, I am sure it wouldn’t have been long before their aggressive tactics caused another SEO to do exactly what Josh did.  You know this will show up on some case studies at future conferences about what not to do!