Home
Other
shoemoney
The Rise of Knee-Jerk Outrage: Why You’re a Moron for Grabbing Your Internet Pitchfork

Back in October, a waitress who was bartending at the Cha Cha Lounge here in Seattle discovered something that I’m sure has happened to every server in the restaurant industry at some point or another: she got stiffed by a customer. Not only did the cheapskate patron opt out of leaving her a tip, he wrote on his bill “P.S. You could stand to loose [sic] a few pounds.”

What a charmer (image via the Seattle Weekly)

A dick move (although Ms. Liss ain’t exactly the healthiest looking girl in the Pacific Northwest, so the dude’s advice, while harsh, isn’t entirely unwarranted) for sure; I’d imagine something like this would be the cherry on top of an already busy, stressful day at work. But we all know the world is full of assholes and that you can’t let the occasional d-bag bring you down. The best thing to do is to just ignore the hater and move on, right?

Not when you can call upon an angry Internet army to exact sweet revenge! Ms. Liss opted to post the receipt on her Facebook page, reveal the rude customer’s name (he paid with a credit card, which isn’t exactly the smartest thing to do when you’re dissing the waitstaff, but on the other hand I typically expect to patron an establishment without worrying about my personal information being taken by an employee and posted in public), and describe him as being “dressed like that gay kid on Glee.” Awesome, her reaction to getting bullied was to return the favor and make fun of homos in one fell swoop. Naturally, her friends were outraged and the fire spread. People tracked down the customer, named Andrew Meyer, thanks to a photo of him that Liss posted. Pretty soon Mr. Meyer started getting harassed by anonymous Internet users non-stop. That’ll teach the twerp to be nicer to portly bartenders!

…except there was just one little problem. Liss tracked down the wrong Andrew Meyer, a man she referred to as “yuppie scum” simply because he worked at Microsoft and was in a fraternity in college. Who’d have thought there’d be more than one Andrew Meyer in Seattle? The wrong Meyer quickly became the victim of bullying, harassment, and stress all because he shared the name with some dude whose biggest crime was not tipping a bartender whom he also called fat. Talk about a clustercuss. Oh, and here’s the kicker: this isn’t even the first time Ms. Liss wrongfully accused someone of committing a heinous act. In September 2007, she misidentified two men who had been threatening her and a friend. The two innocent guys were arrested and charged with felony harassment despite their claims of innocence, and it wasn’t until six months later that Liss realized she may have pinned the crime on the wrong guys.

Don’t get me wrong, I love some good ol’ Internet drama as much as the next person, but we’re in an age of technology where information is made available and can spread so rapidly that most people take what they read at face value and react to it without pausing to actually ponder its validity. It happens on reddit, one of my favorite sites, all the time–someone will post a sob story, everyone will rally behind the poor guy, then one or two folks will actually do some research and find out the dude is full of shit and is swindling the site, users feel outraged, etc. Or maybe someone posts about how he got screwed big time by some evil, uncaring company or some bullying butthole and everyone gets out their virtual pitchforks and lights their torches, digs up the offender’s personal information, and harasses the shit out of him before realizing that there are multiple sides to a story and the original poster was the one who was being the dick all along.

Want another example? It’s happening right now with this ‘Kony 2012’ movement. If you’re unfamiliar with what’s going on, a nonprofit activist organization called Invisible Children is promoting a 30-minute video about a man named Joseph Kony (obligatory Wikipedia link). He’s basically an African warlord who recruits kids to fight in his crazy resistance army and do heinous shit in the name of culty religious nonsense. Social media slactivists immediately jumped on the bandwagon, updating their statuses with “omg u guyz save africa its a great country.” 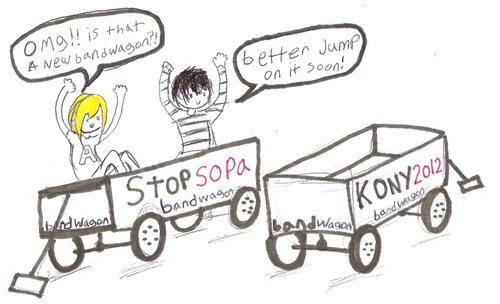 Okay, so they’re building awareness, which is great and all until, as The Atlantic aptly put it, you can’t exactly depose an African warlord with status updates and rubber bracelets:

“Campaigns that focus on bracelets and social media absorb resources that could go toward more effective advocacy, and take up rhetorical space that could be used to develop more effective advocacy. How do we go from raising awareness about LRA violence to actually stopping it? What’s the mechanism of transforming YouTube page views into a mediated political settlement?…Treating awareness as a goal in and of itself risks compassion fatigue — most people only have so much time and energy to devote to far-away causes — and ultimately squanders political momentum that could be used to push for effective solutions.”

Or, as this meme more succinctly puts it: 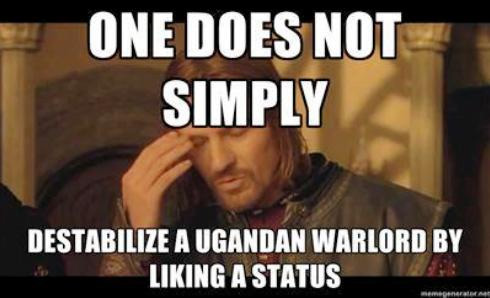 Right now you may be thinking, “Ugh, whatever, don’t poop in my soup! I’m just trying to support a great organization that’s trying to do the right thing!” Yeah, that’s all well and good until you discover that Invisible Children spent $8,676,614 in 2011, only 32% of which went to direct services and the rest comprising of staff salaries, travel and transport, and film production. Or that the video milks out a kneejerk, emotional reaction without explaining the situation in great detail or suggesting viable solutions other than “Uh, the U.S. should totally intervene” (even though our government has had Kony on its radar for a decade so it’s not like they didn’t know about this dude until now, and obviously we’ve got nothing else on our plate so naturally we’re clamoring to fix this solution because our country has nothing better to do, like, say, fix our economy or deal with the war we’re already balls deep in).

I’m not trying to take a dump on the Kony 2012 cause or on Invisible Children; I realize it’s a sobering situation and that this charity is aiming to spread awareness. It’s just that this movement is another example of people shoving one another aside to be in the front row of a phenomenon they don’t even fully understand. Whether you’re clamoring to defend someone by attacking whoever she points her finger at or you’re jumping to support a cause because it’s the hip thing to do without researching the organization behind it or checking the facts behind the story, you’re contributing to this age of knee-jerk outrage.

Most people would rather be seen as being “in the know” without actually taking a few minutes to see what “the know” actually is. It’s ironic that at a time where we have access to a wealth of information at our fingertips, we buy into everyone else’s bullshit without second-guessing any of it. Be smart. Be savvy. Question things. I’m not saying be a cynical prick, but don’t automatically believe something that’s crafted specifically to evoke a strong emotional reaction. Have a little integrity and a little intelligence before pouring yourself into the cesspool of misinformation. I personally would rather arrive late but well informed to the party than show up first and clueless. Unfortunately, too many Internet users are prone to shooting first without even bothering to ask the question at all.