I am auctioning myself to wear your company’s shirt for 3 days during the Affiliate Summit West Event January 2012 in Las Vegas.

All of the proceeds go to Matt Talbots Kitchen which feeds the homeless, in the name of the Â Affiliate Marketers Give Back foundation which is a non profit group lead by Missy Ward (Affiliate Summit Co-Founder).

The winning bidder can pay us by Credit Card, Â Check, Â or Wire Transfer.

This is a HUGE oppournunity to get your company out to a very targeted audience. Â I normally take between 50 and 100 pictures with people and this year we will be doing video again interviewing people in the expo hall.

Here is the history of my T-Shirt Auction for Charity and details:

The winning bidders Trainsignal, makers of computer training software, were in attendance. We gave the money on behalf of the Affiliate Marketers Give Back foundation to the National Breast cancer society.

Then at Affiliate Summit East 2009 I did the same auction again for the Lincoln City People’s Mission Homeless Shelter and it ended at $11,000.00. The winning bidder was the giant coupon site retailmenot.com 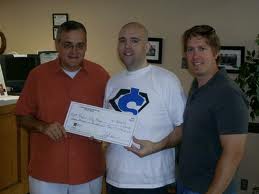 Once more a year ago at Affiliate Summit West 2010 I held an auction that raised $10,100 for the People’s City Mission again, the high bid coming from ClickBooth. 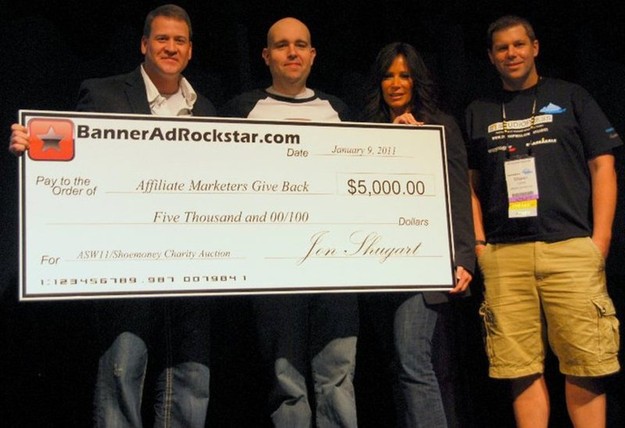 Its really been awesome raising over $45,000 at Affiliate Summit events by wearing a companies t-shirt.

This is a great chance to get your brand out there and also support a GREAT CAUSE!

You will receive a TON of exposure. And A LOT MORE than just a handsome model wearing your logo!

My photo gallery is the most visited section of ShoeMoney.com other than the root domain. Check these stats out from the last year:

You are not reading that wrong… over 2 million page views and almost 1.7 MILLION UNIQUE page views. That’s quite an amazing reach!

But besides the TONS of photos I will have in my own gallery, there will be loads of them on flickr and Facebook that people will tag and they’ll be seen by many.

So put your logo in front of TONS of people NOW!