The Internet is Not Your Tuxedo T-Shirt

I get allergy shots fairly regularly, and one time while I was getting my shot, the nurse asked what I did for a living. I said Internet marketing, and she said, “Here’s some advice for you.” I mentally rolled my eyes and thought, “Here we go,” wondering what the hell an allergy nurse could tell me about Internet marketing that I hadn’t heard before. It turns out she indeed had some valuable information, which I thought I’d share with all of you.

The nurse told me about an experience she had shopping online. Since she’s on her feet all day, she buys shoes that are comfortable and have a lot of cushion. This particular pair of shoes she prefers to wear doesn’t come cheap, but she managed to find a good deal online. She scoured the website for a phone number so she could call them and ask them a couple questions about the shoes, but she was unsuccessful. Frustrated, the nurse fired off an email asking how come the website doesn’t list a contact number. The response she received was less than professional: “we r an internet company” (yes, “r” instead of are” and improper capitalization abounds). Unimpressed with how this company carried itself, the nurse took her business elsewhere and opted to spend more money at a more reputable-seeming company. She still ended up getting her shoes, while Company #1 lost their sale.

It’s important to remember that the Internet is not your tuxedo t-shirt. By that I mean that just because you’re an online shop and have no physical location where someone can waltz in and expect to see your smiling face, that doesn’t mean you can compromise customer service. Having an online-only presence doesn’t equal insta-casual — customers still expect you to seem legit before forking over their hard-earned dollars. To them that could mean that you have a business phone number, a mailing address, and no (or few) misspelled words or grammar issues (I know, I know, do as I say and not as I Shoe). 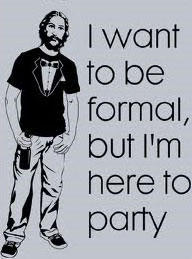 Don’t like talking on the phone? Neither do a lot of people, but you’re still going to run into the occasional customer who feels more comfortable contacting someone over the phone than firing off an impersonal email. You don’t have to have someone stationed in front of the phone like it’s a telethon — set up a recording and check messages daily, then call back people as needed. The same goes for an address — don’t expect to receive care packages or Christmas cards in the mail from your clientele. It’s more there for piece of mind, to assure people that you’re a legit business and you’re not trying to scam them. Obviously not all online shops with this sort of setup are legit and there are scammers who’ve set up bunk contact information, but many don’t go through the trouble and setting it up shows that you’re taking the extra step for your customers.

These are simple steps to give your users and potential customers piece of mind, and it could separate you from a competitor who’s not willing to change out of his tuxedo t-shirt because he wants to feel casual at a formal party. With the Internet as over-saturated as it is, it’s little things like this that can give you a slight edge over someone else and win both a customer and his or her dollars.

118 thoughts on “The Internet is Not Your Tuxedo T-Shirt”