My Secret To Dominating Digg.com (years ago)

Ok I have a story to share… one I been telling for a while for fun and always meant to post but just never gotten around to it.

I used to be addicted to try to make the front page of digg… but I often had trouble hitting the front page. Sure it would happen every other month or so but it took a lot of work. Then in 2007 one month I made it 5 times… including 2 times in the SAME DAY on Feb 21st 2007: 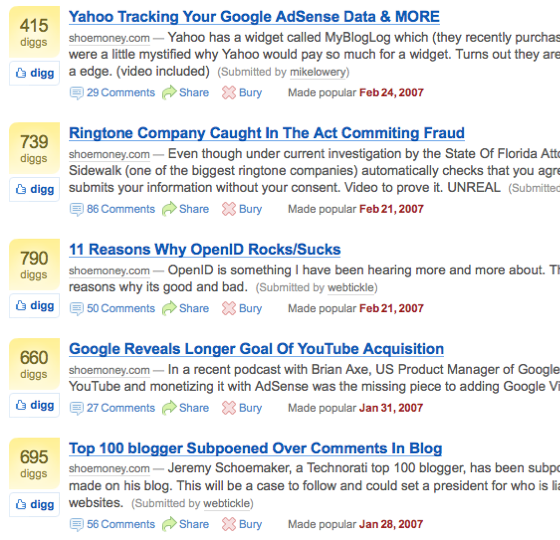 So how? How can one website all of a sudden become attractive to the digg users who normal HATE anything that looks close to a internet marketer…. or SEO….

Well I made one simple change. I swapped out all ads for more… digg user friendly images. In particular I changed the leader board ad for a “I love Linux” banner and the square on the right to a image of a guy peeing on Microsoft.

Here you can see ShoeMoney.com normally:

and now if you were to come from digg.com:

There are a lot of lessons from this that I still apply today. Changing your website or landing page based on where your visitors are coming can help make a huge impact on conversions.

139 thoughts on “My Secret To Dominating Digg.com (years ago)”