The much anticipated iNetMania iPhone game launched today and is now one of Apple’s featured applications in the app store. 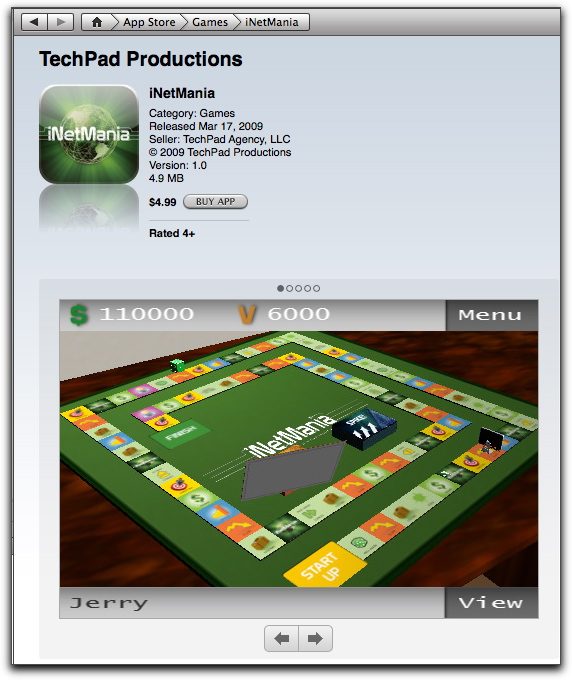 The game is a lot like Monopoly but instead of buying real estate, you buy web properties. It’s pretty cool and right up my alley.

Key points about the game:

* Quick Play mode, easy to understand rules and low learning curve puts you in the game right away
* Achievement system (similar to Xbox 360 games) sets gameplay goals and allows you to compare your prowess against other players, as well as unlock bonus playing pieces
* Save your progress during any moment in the game
* Shake the iPhone as a die cup to toss the die
* Use the Accelerometer to shake the die in a 3D, virtual cup with real-world physics (a first for the iPhone!)
* Based on the award winning board game ServerMania!
* Un-lockable player game pieces â€“ collect them all!
* Great graphics, featuring dynamic animations with fluid, openGL animations
* Gameplay is saved if you quit or have to take a call
* Swap n’ Playâ„¢ with up to 3 other AI or human players

Internet Marketers will see a lot of familiar faces in the game such as Neil Patel, The Webmaster World Crew, Myself, and many others!

The iNetMania game is $4.99 in the Apple store. We might have some contests with this in the future so it would be a good idea to brush up your skills now.