This post takes me a long time to go together but I know a lot of people enjoy the recap.

Google decided they were going to slap foreign web masters in the face by terminating the referral programs.

I talked about the importance of getting out of your comfort zone.

On January 21, I predicted a stock market crash and explained why I did not have much money in the stock market.

Michael Arrington of Techcrunch sent me press credentials for the Techcrunch awards and I got to roll with some pretty big names like Kevin Rose (digg founder) and Mark Zuckerberg (facebook founder):

Rocketprofit sent me a badass Video Camera that I use a TON!

Danny Sullivan came on the radio show to talk about my recent comments about SEO People.

Undermat company sent me some undermats that were super pimp!

I wrote about how to approach people for interviews.

I made a post with a video showing all the free stuff we get from companies.

My post about Customer Support Does Not Matter In Online Commerce sparked a lot of debate.

While driving cross country I answered some questions from readers.

I talked about the power of negative press and why you should embrace it.

And I also explained what lead scrubbing was and how it worked.

At the end of February, I traveled to SMX and at the beginning of March, I posted a video with Randy from SEOMOZ about blog monetization.

I listed out the top ten extensions I think are a MUST HAVE for Firefox.

Who could forget this? I also had a little screw-up when I accidentally ordered oh, let’s say, an extra 30 iPods! 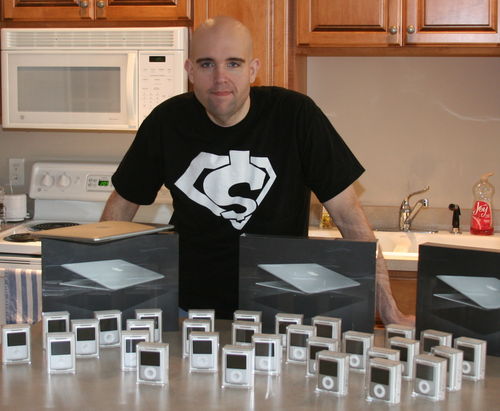 The first Shoeperstar, Aaron Kronis, headed to the SXSW conference with me and had a blast.

Started off April Fool’s Day with a little video. 🙂

The Elite Retreat 2008 was kick ass and I gave a nice wrap up about the event.

I also explored different ways to make money with the YouTube Partner Program.

Then I wrapped up the month by answering a bunch of questions. Round 5 baby!

I really got some people talking when I said that I believed SEO has no future and that it would eventually die. I took the conversation a step further by emailing some industry people for their definition of SEO and here’s what they had to say!

I also gave some advice on how to keep commenters and their comments in perspective followed by a sixth round of questions.

In May, my wife J and I celebrated our fourth anniversary.

I also decided to vent a little and list the 10 Reasons Why You’re An Idiot.

And to kick the summer off, I also pimped out the ShoeMoney pool. 🙂 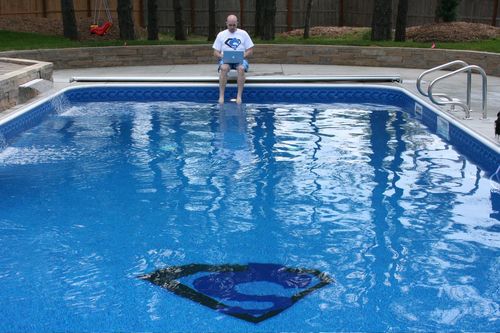 My wife was about to have our second child so I was unable to attend the SMX Advanced conference. Instead, I recorded a video about buying sites for SEO purposes for all the attendees. I also shared it here with you.

From fear to motivation, I also gave my theory on why most people fail in business.

In June, I also looked at Google Trends compared to Alexa, Quantcast and Compete.com and people had a lot to say.

Joe Daley’s start-up, BlingEasy.com, made for some interesting photos.

It’s a girl! I had my second child, on July 3, actually ten minutes before the fourth of July!Â  We named her Joslyn, and let’s just say – this was one of the craziest (and scariest) week’s of my entire life. 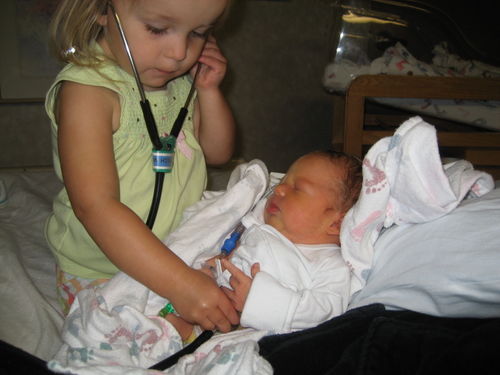 Know the Internet marketer’s drug of choice? If you don’t remember, caffeine barely beat out…

John Chow also invaded the “Shoeplex!” – in other words, my office.

The .me domain registration got off to a crappy start (and almost 200 people had something to say).

I also gave a preview to the ShoeMoney Tools (which now has a ton of users and still growing!).

The Board of Advisers for ShoeMoney Tools was announced. Pretty sweet list of people.

I revealed that I am a recovering addict of MMORPG games. 😛

Tons of people signed up for the ShoeMoney Newsletter. (If you haven’t done it by now, you can still sign up here.)

Jammed out at the CPA Empire Breakaway event. A little after hours fun. 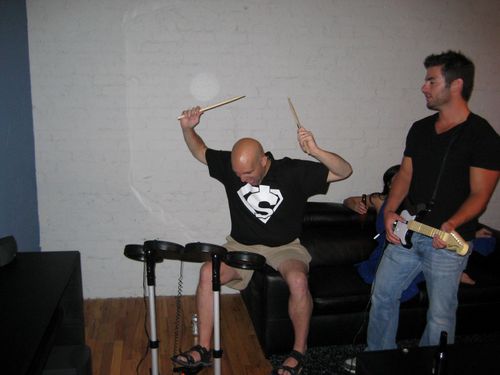 At the SES San Jose Conference, I learned how to tip a maid. haha

Germany’s greatest SEO definitely threw down some rhymes. Beatbox anyone?

Logo Samurai transformed John Chow and I into animation domination.

And Harrison Gevirtz gave some great insight on how to optimize PPC campaigns.

Traveled to Denver, Colorado where Media Breakaway let us take a look behind the scenes of their company.

I wrote a post about how to get advertisers or sponsors for your website followed by a post on how to get users to your site.

Who could forget the quick approaching election and Joel Comm’s launch of the Sarah Palin action figure? Hi-ya! 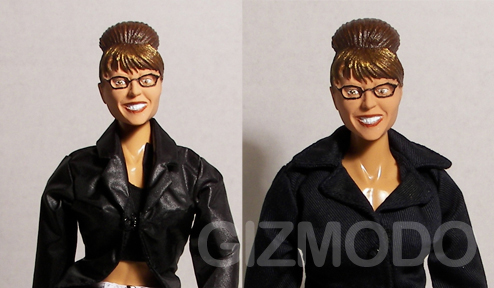 I also gave some advice on what sticking your “pecker” out there really means and explained why I don’t respond to every email.

I shared with you what I consider a successful blog.

I even explored whether or not affiliate companies could/should demand your Google AdWords account info.

Gave some travel info as to how I roll in Sin City and why I love the Stratosphere.

It was scary times for the economy and I talked about my investment strategies and take on the whole bailout.

TechCrunch revealed that Google’s image search may include sponsored links.

I made a post on how to hold your own blog contest and answered the question we may all ask at one point – Is college worth it?

Nate Moller from MollerMarketing.com conducted one of the best interviews ever.

And I asked the question, “Have you ever lost it all?”

Traveled to Orlando, Florida for a “Behind the Scenes” tour of the affiliate network Market Leverage and gave some tips on how to get 80% off your own travel.

Interviewed Ads4dough owner, Jason Akatiff about blackhat SEO and affiliate network and his perspective from both sides of the industry.

In 2008, I not only started using Twitter, but at the end of four months – I had seen the Twitter light. (Actually, I think 2009 will be the year for Twitter and we’ll see alot more users joining.)

Originally part of the ShoeMoney Newsletter, I re-posted this article on how to make money online with local affiliate marketing programs. It’s truly the new gold rush.

Google tells Yahoo! to stick it.

Joost de Valk did a great guest post on 7 steps to get more comments.

My wife and I traveled to Vegas to see Madonna and had tickets for the wrong night. Whoops. Did a little social engineering to fix the situation. 🙂

My Website Magazine article, “Beyond AdSense”, hit the shelves.

I announced the Elite Retreat 2009 line up and we were already 75% sold out on the first day.

I gave a recap of the ShoeMoney Tools and the tools we continue to add.

Traveled to my hometown of Moline, Illinois, and saw the festival of trees with the fam. 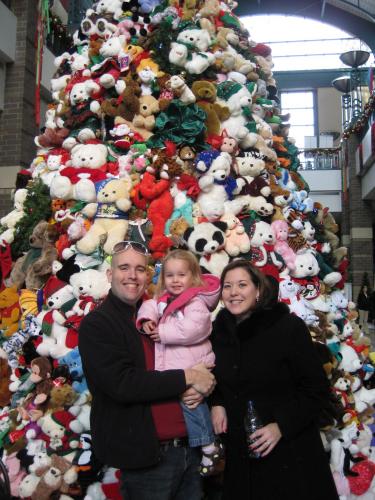 I started off my holiday shopping with a $500 shopping spree at Kmart.

Then I posted video proof that the recession does not affect online marketers. haha

Used a story about undercooked shrimp to demonstrate the importance of quality.

Affiliate Summit West let me give out 20 FREE passes to the conference this January.

After a few months at it, I also reviewed the MySpace MyAds advertising platform.

I’ve done alot of things, but now I can add auctioning myself on eBay to that list. It was a great way to earn over $10,000 for the Affiliate Marketers Give Back charity! 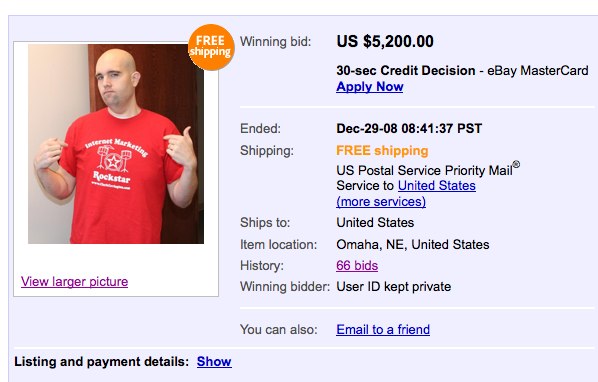 In the spirit of giving, I also made a post on how to get others to donate to you through Amazon Wish Lists.

Intel gave me an amazing gift of an Core i7 processor and system. And now I’m giving one away, too! What better way to start 2009?