No, You Are Not Qualified to Speak at Conferences

I got the idea for this post last week, and before I could sit down and write it I caught The Yes Men Fix the World on HBO. It so beautifully exemplified my point that I felt I had to make a shout out. For those of you who are unaware, the Yes Men are a group of activists who set up fake websites and pretend to be various big corporation spokespeople. They get mistaken for the real deal and often get invited to speak at numerous conferences and trade shows under the guise of representing companies and organizations like Dow Chemical, Exxon, the WTO and HUD.

In 2004, the BBC contacted the Yes Men after coming across their fake Dow Chemical website and, thinking they were actually Dow representatives, invited them to speak on the 20th anniversary of the Bhopal disaster, arguably the world’s worst industrial disaster in history. In the interview, the fake Dow spokesperson said that Dow was prepared to accept responsibility for the chemical spill and liquidate Union Carbide’s assets, using the money to provide restitution and health care to the thousands of victims of the spill as well as clean up the still-contaminated area (watch this video for the full interview). While millions of people felt that Dow was finally doing the right thing by acknowledging responsibility and using their profits to help mankind, Dow’s investors apparently didn’t share the same sentiment: as a result of the hoax, Dow’s shares dropped three and a half percent, costing its shareholders $2 billion in the span of about 23 minutes.

This isn’t the first time that the Yes Men have been invited to speak at a press conference, interview, corporate event, conference or trade show, and it likely won’t be the last. These conference organizers embarrass themselves by not doing their homework and checking to see if the people they invite to speak are actually a) who they say they are, and b) qualified to speak on the particular topic. While I watched the documentary, I couldn’t help but think about our own little Internet marketing industry and various speakers who seem to pop up at every event reeking of something… 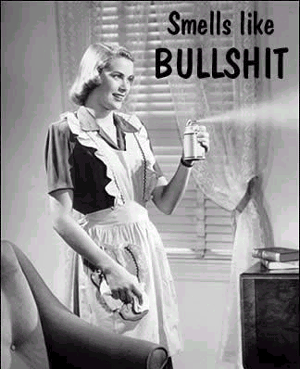 Last week Shoe wrote about how, in his opinion, Incisive’s conference value is rapidly declining. I haven’t been to an SES in a while (SES San Jose in August will be my first SES show in the past year or two), but I can say that after having attended and spoken at numerous conferences in the past four years and upon looking at the agendas for dozens more shows, I think that a huge problem is the list of speakers who somehow manage to get approved to talk to thousands of paying customers and spout off complete and utter nonsense and bullshit.

I’ve seen people who have no experience doing social media marketing sitting on social media panels looking like smug pricks and offering misguided (and often vague and incorrect) advice to the audience. Folks who don’t know a thing about affiliate marketing but somehow show up at affiliate shows to ramble through a slide deck and pass out business cards. People who are friends with the conference organizers and are well connected enough to get a speaking spot but don’t have the actual knowledge or experience to be doling out advice. Guys with impressive-sounding titles who put on a good charade but have little to no relevant, real-world experience.

There are people who I know are full of shit and not only know nothing about Internet marketing, but shouldn’t even be running a business period…yet there they are at each and every goddamn conference, flinging bullshit to the audience. They get mocked by the Internet marketing community, receive poor speaker scores, yet there they are at the next event. I blame the organizers for this irresponsible laziness. Sometimes they just want someone from a big name company so they settle on whoever they can get, even if the person they’ve invited to speak is woefully underqualified to talk about marketing. Other times they’re just lazy and just slap someone they know onto a panel in order to fill in the gaps, regardless of how many times the speaker has given the same tired old presentation before.

Regardless of the reason, I’m sick of seeing people who have no business talking about Internet marketing showing up and speaking at these conferences. You want to know why you’ve never seen me on a paid search panel, or why I’ve never given a fifteen minute presentation about hosting issues? It’s because I’m not an expert on these topics. I’m humble enough to know my limits and to respect that the paying audience deserves to hear an actual expert speak to them, not some asshole who’s there because they know a guy who knows a guy who organized the event and needed a spot to fill.

I know I’ve blogged before about faking it until you make it, but that’s to help get your foot in the door. At a certain point you’re either an expert or you’re not, and if you pretend to be something you’re absolutely not, you’ll end up losing the respect of your peers and getting called out by the actual experts in your niche. In the meantime, hey conference organizers: get off your asses and find some real, qualified people to speak at your shows — maybe then more people will find value in your events.

77 thoughts on “No, You Are Not Qualified to Speak at Conferences”