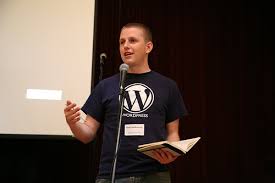 I love interviewing non SEO, but probably some of the most influential people about no-follow. Without very influential people the whole no follow movement would never work. So I shot a email to Matt Mullenweg, the head of WordPress which was the first time I had ever really seen the no-follow tag being used, some questions. Matt also came on my radio show last year for a full hour which you can listen to here if you want.

Shoemoney: I think I read someone that you were the inventor of the “rel” link attribute? If so what was the original vision for it?

MM: Not at all, it’s part of the HTML specification.[1]

Tantek Celik, Eric Meyer, and I used the rel attribute to to create XFN[2], which was one of the first standards aimed at enhancing valid HTML with additional semantics, which is now fairly common under the Microformats banner.

The vision was to imbue regular HTML with meaning using a set of keywords with a shared understanding and interpretation. There are now several of these elemental microformats.[3]

Shoemoney: Did you happen to patent or file for a patent on using relational link attributes ?

Shoemoney: Did you ever think the nofollow tag would become the standard now used by all the search engines?

Shoemoney:Do you consider yourself a SEO? Do you think you have a good knowledge of SEO?

MM: I think it’s important to structure documents using web standards with proper headings, markup tags, and a logical order to the content to make it accessible to plain-text user agents like screen readers and search engine crawlers.

When SEO crosses with something that you would do for a good user experience anyway, like having relevant navigation between pages, then I’m all for it. When it strays from that I tend to avoid it because I don’t think it’ll be effective in the long term, meaning 1-5 years from now.

Shoemoney: In your opinion what do you think the nofollow should be used for?

MM:I’d defer to the specification:

Shoemoney: Do you have any current or future plans with Google that should be disclosed that could be influencing your views?

MM: Besides occasional jaunts on Larry and Sergey’s jet, my relationship with Google is pretty normal. WordPress.com is seen as competing directly with their Blogger product, Automattic has an Adsense account, we use Google Analytics, and I recently switched from Bloglines to Google Reader.

Shoemoney: Thanks Matt for all your hard work on WordPress and for taking the time out to answer these questions.